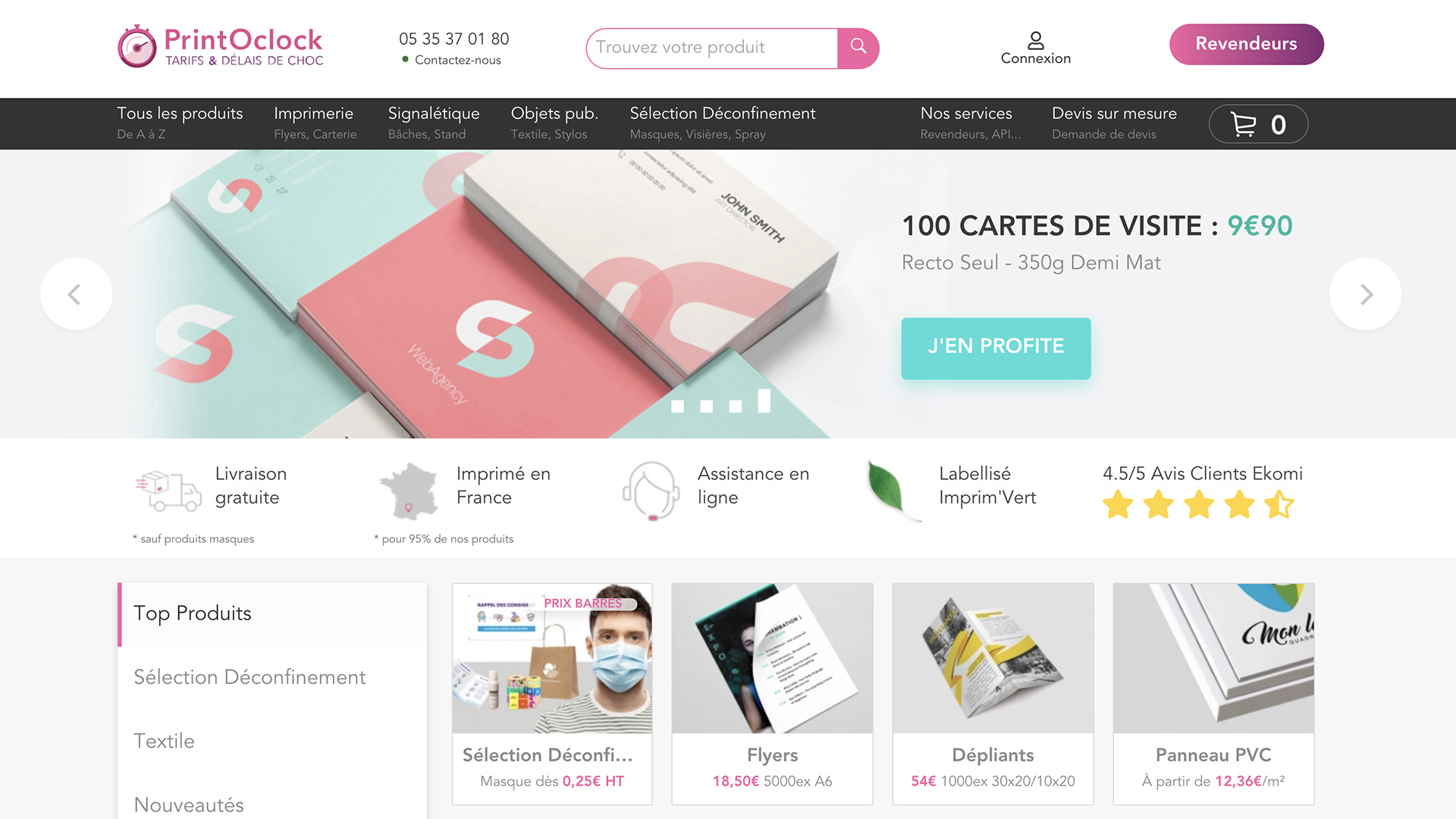 There are a few true leaders on the e-printing market. The branch is quite difficult and replatforming of an online store to reach that target is truly complicated. Nevertheless, extremely talented developers that worked on making printoclock.com the best possible, have reached their goal with Sylius. How?

Time of getting “First meaningful paint”

Printoclock is a Toulouse company, which was one of the precursors of online commerce for the printing industry. This year the company is celebrating its tenth birthday and it’s high time to stop thinking of Printoclock as a startup and admit that the success is real: from one million euros in 2012, the revenue reached more than 12 M € in the last year. If it comes to clients, their 220,000 customers are small businesses, merchants, freelancers, communication agencies, and other printers with an average basket value of 100 €.

Faced with international competition from the United States, the Netherlands or Germany, Printoclock wanted to remain independent. “We have succeeded because we have always been profitable” admits the founder of Printoclock. To stand out, the Toulouse printer commits to a delivery D+1. Very short deadlines have been made possible thanks to the creation of an internal workshop in 2010 via an investment of half a million euros. A park of machines provides off-set printing in large series or digital for smaller series as well as cutting and filming.

“I was working for several years on Sylius before v1.0 and I really enjoyed it in building Clicher mobile application backend app, This first project validated that Sylius was a good option for Printoclock migration.”

What was the challenge?

For Printoclock, there came a time when optimization and maintaining the old platform was so demanding that developers felt completely blocked with coding new features. It was high time for a change. The perfect platform for Toulouse printer had to be fast in developing, neatly written and tested. So, Printoclock decided to migrate the old OSCommerce to Sylius.

The whole project was led by only four Symfony developers and that’s the reason to be impressed. Experts from Printoclock have had two main challenges throughout the project. The first case was strongly connected with data. Before Sylius, the shop was functioning for 10 years straight, so the amount of data to migrate was truly enormous. What is more, the old platform became very messy and the developers had to organize it in proper order. The second thing was closely related to the prices generator and the way that Sylius could help in creating the functional system for setting the prices immediately when ordering. To highlight how big it was, Pierre Rigal, the CTO of the project, admitted that building the advanced prices generator took half of the general development time.

Technical view on the project

Sylius was the cornerstone of the new platform, providing the eCommerce foundation to build on the specific features such as, for example, prices generator, ticket system, an order issue management system, a campaign management system, invoicing, refunding, credit memos, and more recently a Print API that allow our customers or other printers to easily place orders from their system and deliver in France. The CMS chosen by Printoclock was CMSPlugin created by our Partner BitBag (this extension is available in our newly-opened Sylius Store). If it comes to integrations, Printoclock opted for Marketing Automation (Emarsys), several other marketing tools (for AB testing and advanced analytics) and Business Intelligence (Metabase). For hosting platform, the company decided that the mix of OVH / Online and AWS will be the best option and Pierre Rigal is confirming that the choice was correct.

On a daily basis, Sylius in Printoclock is dealing with 1000-1500 orders with a speed three times faster than in case of the old platform. Estimated time of getting to the “first meaningful paint” (according to Google Lighthouse reports) takes now 1,8 second when before Sylius it was 4,9 seconds. Also, as one of the causes of the faster store, the bounce rate decreased by about 5% after changing the platform to Sylius.

“Sylius offered us complete control over what we do. We were able to do whatever all teams wanted. Don’t forget that Sylius does not only run our eCommerce but has already started to replace many internal applications here.”

Replatforming after ten years can be a challenge and the choice of the new platform is critical for the success of the project. When there are many features and integrations to migrate, developer productivity and the quality of new codebase is essential.  If you are facing a similar challenge and would like to have a non-sales discussion with an expert in eCommerce & Sylius get in touch.